skip to main | skip to sidebar

I will be back

I've been gone for awhile. Apologies to all. I will be back.

You know how blogging is. It all begins in a torrent of activity. Posting all the time, checking the counter, looking for stuff to link to, finding kooky, illustrative photos. Then you sort of get tired of it. Other things start to shuffle to the front of my brain queue. Yes, there's a line, so get in it, blogging.

You may have read my previous post about the Powerbook 1400cs. I've been getting this 10-year-old laptop ready as it can be for use in the '00s, and that's been my extracurricular pursuit for the last long while. I've toyed with starting a blog just for this Macintosh project, but I'm wary of this geeky side eclipsing all others -- hence the lack of posting here over the last month and a half. 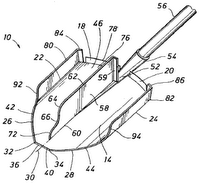 Among things Ilene and I have been doing is getting our back yard in shape. Yeah, it's been more than 10 years since we moved here, and we're just getting to it, but hey, life intervenes. We've done quite a bit of cleaning up, including taking out half of the patio, which consisted of heavy 12-by-12-inch paving stones and poured concrete in a checkerboard fashion -- that's where the eventual lawn will go. After I dig for and subsequently install sprinklers. And Ilene did a great job getting plants in the side portion (we took out a few dead trees and such -- and I only inadvertently cut off our phone service once).

She just trimmed the giant fountain grass and surrounded it with marigolds and nasturtium, and I began trimming the giant trees that are depriving ou 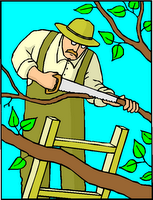 r future lawn of the sun it needs to keep from dying. I'm doing my own tree trimming BECAUSE GETTING PROFESSIONALS TO DO IT IS FREKIN' EXPENSIVE. So far I've used the 5-foot stepladder and loppers, but Bruce, Mr. Jack of all trades, is providing one of those trimmers-on-a-pole, albeit not one with a saw on the end. I'll try to get that and the extension ladder in my car sometime this weekend so I can really start trimming away the canopy in the Van Nuys rain forest (with no rain).

And there's also been Big Cat's surgery and subesequent move into the house. Yes, we live with a cat. A big cat. Formerly, we thought, a tabby, but now a Norwegian Forest cat.
Posted by Steven Rosenberg at 1:59 PM 1 comment: